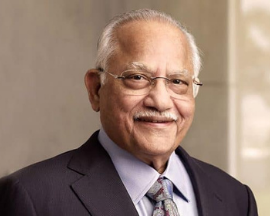 Dr. Prathap C Reddy, the visionary Founder-Chairman of Apollo Hospitals is acknowledged as the architect of modern Indian healthcare. He is a compassionate humanitarian, who has dedicated his life to bringing world-class healthcare within the economic and geographic reach of millions. The institution that he envisioned and built – Apollo Hospitals, steered a revolution and marked the birth of the private healthcare industry in India. Apollo Hospitals opened its doors in 1983 and introduced international quality healthcare to India, at a cost that was a fraction of comparable costs in the western world.

Over the years, Dr. Reddy has worked to harness technology and insurance to take healthcare to the masses. The pioneering success of telemedicine and innovative insurance in Aragonda, the world’s first V-SAT enabled remote village in Andhra Pradesh validated the concept of ‘Healthcare for All’. He also envisioned the groundbreaking Apollo Reach Hospitals model, one that takes high quality healthcare to semi urban and rural geographies. Dr. Reddy firmly believes that mandatory health insurance is critical for the nation. The innovative insurance project of Re.1 a day that he introduced decades ago in his native village has been adopted in multiple ways across the country and created the platform for the Government of India’s Universal Health Insurance programme for the below-poverty-line population.

In the firm belief that preventive healthcare is the key to good health, Dr. Prathap C. Reddy propagated it with the concept of Annual Health Checks and over 20 million health checks have been performed by the group. As a Cardiologist, he recognized that the battle against disease had to go beyond hospitals and he championed the Billion Hearts Beating Foundation, an endeavour that deploys innovative mediums to encourage Indians to stay heart-healthy.

Dr. Reddy has also been the Chairman of the Confederation of Indian Industry’s National Health Council and advisor to its committees on Healthcare, Health Insurance, Public Health and Pharma. He was pivotal in the genesis of NATHEALTH – the Healthcare Federation of India, which today is one of the nation’s most powerful and influential forums in facilitating the shift in mind-set, delivery and policy making to nurture the gift of good health for all in India. A dedicated philanthropist, Dr. Reddy introduced social initiatives that helped transcend barriers and a notable example is the Save a Child’s Heart Initiative that is addressing the widespread issue of congenital heart disease in India.

Dr. Prathap C. Reddy was conferred the Padma Vibhushan, the second highest civilian award by the Government of India, an acknowledgement of his untiring pursuit of excellence in healthcare. In July 2018, Dr. Reddy was conferred with the Lions Humanitarian Award. He was then the fifth Indian and second medical doctor to be conferred with this exalted honour. The list of accolades that Dr. Reddy has garnered over the years is exhaustive and a testament to his significant contributions towards society and medical science. This includes the Ernst & Young ‘Entrepreneur of the Year’ Award (2001), Honorary Doctorate by UNSW, Australia for exemplary contribution to the health and wellbeing of millions (2016), Lifetime Achievement Award by the Hon’ble Vice President of India, Shri Venkaiah Naidu at AISCCON (All India Senior Citizens Conference) (2018), to name a few.

Dr. Prathap C Reddy, the visionary Founder-Chairman of Apollo Hospitals is acknowledged as the architect of modern Indian healthcare. He is a compassionate humanitarian, who has dedicated his life to bringing world-class healthcare within the economic and geographic reach of millions. The institution that he envisioned and built – Apollo Hospitals, steered a revolution and

DETAILS ABOUT THE EVENT